On the planet there are many species of horses. Most of these breeds have been domesticated by man. However, there are still breeds of wild horses and the Sorraia horse breed is one of them.

In America, Asia, Europe, Australia and Africa there are specimens of wild horses. This time we will talk about a breed of wild horse from Europe, specifically from Portugal.

Now, the Sorraia Horse is a breed of horse from Portugal. There are several versions regarding its origin and that some indicate that it originated from the descendants of a small population of wild horses. Others suggest that they were the ancestors of the American horse.

The Sorraia breed is an Iberian wild equine, in terms of its genetics it is the same as that of other domestic Iberian horses.

Throughout this article we will delve into everything related to this unique Sorraia horse breed. 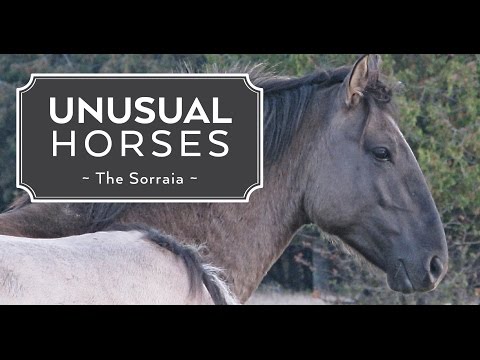 The Sorraia horse comes from an ancient lineage of wild horses from Portugal.

Its physiognomy is similar to the prehistoric horses in works of art found in the Iberian Peninsula.

The Sorraia breed is linked to the now extinct wild horse Tarpan, which lived in southern Europe and Asia.

The name of the breed is very unique, as it results from the mixture of the names of the rivers Sor and Raia. This is due to the fact that the life remains of large populations of these horses have been found in the area.

This breed has had great dominance in various modern Iberian breeds such as the Alter Real, the Andalusian Horse, the Cartujano or the Lusitano.

At present, the influence of this breed has been demonstrated in two species of horses in the United States.

The current breed was discovered by horse breeder Ruy D’Andrade in 1920. It was when he found a group of 30 horses in the wild in Sesmaria.

Today Sorraia horses are found in the Sierra de San Mamede in Portugal and in the Sorraia watershed in Spain.

The wild reserves of these Sorraia horse breed, for the year 2004, had a population of approximately one hundred and eighty animals.

For this reason, the authorities and horse lovers must work together to preserve this breed of wild horses from Portugal.

In the 1920s the horse breed was rediscovered by Ruy d’Andrade. This is an outstanding horse breeder, specifically of the following breeds: Alter Reals and Lusitanos.

This man encountered a herd of thirty wild horses, yet D’Andrade was unable to capture any.

Despite this, he managed to acquire his own herd of horses similar to the Sorraia breed of breeders in the area.

The offspring of these horses are still managed by the D’Andrade family in Portugal.

Characteristics of the Sorraia horse breed

Next, we mention some of the characteristics of this unique bighorn horse from Portugal

One of the unique characteristics of the Sorraia horse breed is that despite being in the wild, they have a serene and docile demeanor.

In view of this peculiarity, it is quite possible that interaction with human beings is easier.

In addition, the Sorraia horse breed are resilient since their life dynamics are strong.

These animals can be fed with little forage, endure extreme temperatures among other things.

Another characteristic of these horses is that they are long-lived.

The data about Sorraia Horse Breed

The current breed of the Sorraia horse was discovered by Ruy D’Andrade.

D’Andrade family still has a number of Sorraia horses in the wild on their farms.

This population of horses comes from 7 mares and 4 stallions of the family.

Undoubtedly, this family has made a great contribution to the preservation of this breed of horses, iconic of Portugal.

The Sorraia horse breed is the wild horse of Portugal and whose characteristics leave horse lovers astonished.

Well, his docile temperament makes him able to interact at some point with human beings.

Gustavo Mirabal and his wife Carolina Mirabal love to document themselves in relation to the breeds of bighorn horses in the world. Well this gives you a broader idea of ​​the behavior of horses.

Let us remember that the Mirabal Chapellin spouses have been closely linked to the equestrian world.

In the days of G&C Farm they practiced show jumping and had a leading training center in the United States.

It should be noted that at present this equestrian center is inactive, although the world of horses is still one of the favorite hobbies of this couple.

Today, Mirabal Chapellin spouses are focused on the financial field in the United Arab Emirates

This couple is always reading horse-related topics, hence the interest in showing a little about the equestrian topic on their websites.